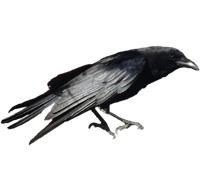 Everything has begin from our programmer, leader and founder of the team, Lorenzo Vannuccini – ‘Vannu’. Since he was a child he has this big dream, “to create videogames”, but he simply doeas not have the tools to make his dream true, untill a day, in the third year of high scool, the electrical engineering’s professor casually decised to fill an empty hour introducing the bases of the programming language C/C++. Vannu felt in love with the subject since the first lesson, so he decided to study it on his own, and he used every single moment of his free time to learn new things and make him better, even cutting times from other things. Problems will not be less and it would be a long path, but thanks to his strong passion for the subject he has never surrender. 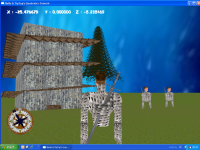 After some years he started to adventure in the tridimensional graphics’s world, a new and misterious filed, but at the same time really affascinating. He started studying OpenGL, the most famous open souce multiplatform library, highly used in videogames industry (DirectX is the enemy). The first experiments started to having form!.

Inevitably to create all in 3D alone, he had to learn and cover the position ofmodeller and illustrator. DUring the years he especialized in the game developer’s art and, been inspired from his favourite fantasy videogame, Gothic II from Piranha Bytes, he tryed to learn as much as possible to create something complete. 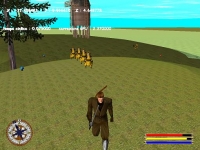 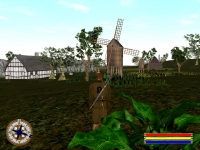 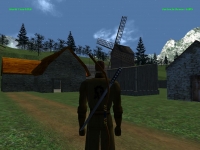 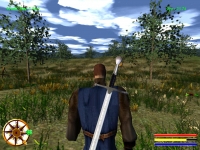 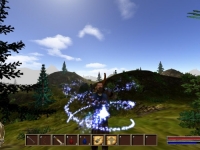 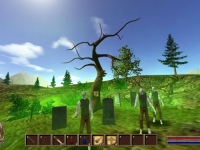 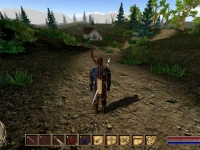 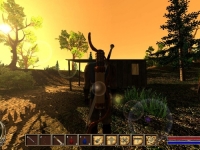 After that he found his own path, since he had his high school diploma in IT he decised that the time has come to make the next step: to create a team. We are all great friends since the high school, Vannu shared always with us his creations, so he decised to involve us and work all together to his project. None of us known so much about the work to do, so Vannu teached us all that he knows and at the beginning if was difficult to have the right rhythm, and the friendship between us in a working environment can produce some work problems, however with the time we learned how to syncronize ourself and obtain results always more satisfying.

However, It was a really big challenge to realize a high level videogame, too much even for a 6 people team, and even if we pushed ourself to the limit, we realized that there were too many problems that we could not solve, first of all the selling system once the product was finished, then delevop’s timings (at least 3 years of work), the lack of capital to use it as technoly stuff and hight trained workers, and last but not least, a market that goes more on extreme graphics, instead of rich contents (despite Vannu’s labour, the graphics quality was still not enouth, compared with platforms like PC and PlayStation 3).

However, on mobile phones the market’s choise changes drastically: simple games are the best, with not photo realistic graphic, but frequently with cartoon style, like the reatro games, where the player’s ability comes stimolated. This, for us, meaned month of developing instead of years, a graphic widely on our range, a store with a selling system and merchandising already integrated and a managing work even for a software housejust born like us.

Because the Apple’s iOs devices (iPhone/iPod Touch/iPad) supports OpenGL, we decided to temporaly set aside the fantasy game’s idea, and first make experience with simple applications.

Our first work was assigned by Innexta srl, and we developed an horror-cartoon app called DeadHeadz. In the game you needed to throw rocks against fluctuating dead heads. 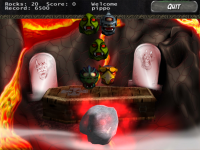 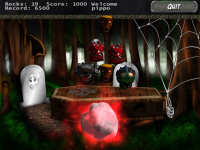 After some time we collaborated with Area51 Publishing, and they assigned us to the develop of Gnok Invaders, and app directly commissioned from the comedian Gene Gnocchi. Inspired from the classic famous game Space Invaders, in this modern arcade adventure the Gene’s caricature has to hit with soccer balls, shooted from a carabine, the “invaders”, played by famous people. 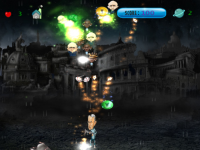 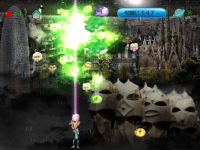 This app has been present to the book exhibition of Torino together with Area51, where even famous people agreeded to partecipate, like the reporter Ivan Zazzaroni, that his caricature was inside the game. 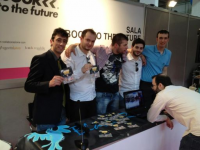 Even thare was a lot of good opportunities, we did not liked working for other people, so we decided to try to develop apps on our own. 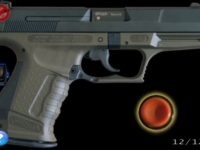 WarKit was the first simple experiment, an app that transform the mobile phone into a military arsenal, even with explosives and katanas. IF you want the truth, It has been born as a joke for a collegue, but given that we notices that the idea was good, the thing become degenerate and we decided to make it better and complete.

Then we started working on a slightly more complex and charming 3D app, Moray In The Bay, but there have been some complications and for now we have abandoned the project. 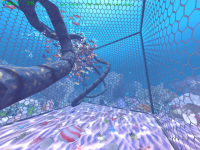 Parallelaly, we developed a simple and little project, called Wild Rabbit, a strategy game with nice rabbits fighting to survive against eagles. 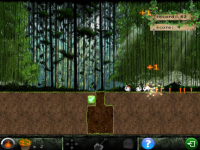 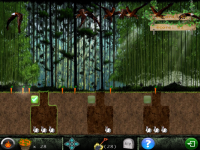 Even now we develop principally videogame apps for iOS devices, however we did not give up our dreams to develop a role play game for Windows. Vannu keeps going studying new algorithm and he keeps improve the engine that, one day, once passed the big adversity, we will allow to make our dream true.

Here some works/study during these last years:

– Physic Particles System: Software for the creation of flowing particles with gravitational fields.

– MatReal SL: an editing 3D software developed to create realistic surface and materials to be used in OpenGL

– Fish School: simulation’s fish on a pack (with increasing entities) that uses the “Boids” algorithm (invented by Craig Reynolds in 1986). Used as an IA (artificial intelligence) in “Gnock Invaders”

– Macrocosm Engine (universe): An universe procedurally generated in real time with an algorithm that make it be continued and fixed, with the use of low memory.

– Macrocosm Engine (land): Tha same basic of the previous, but with lands. Vannu want to improve this technique because in the future It will allows to create and manage a borderless world, by simply using a group of rules: instead of manually insert all the elements, one by one by a level designer, you simply need to define how they coesist inside, and everything will be generated; this for us means a lot of time saving, expecially considering the low number of people in our team. 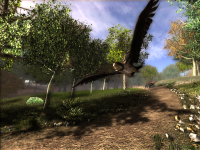